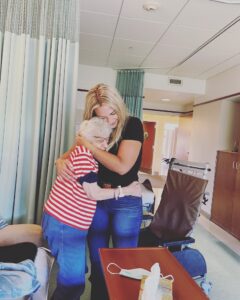 I just got back from Buffalo for a wonderful family visit. We celebrated Mother’s Day and my mom’s 70th birthday. It was beautiful and was filled with spending time with those who I love so very much.
I went to go see my grandmother, who is now in a nursing home. When I walked in, an aide was there trying to help her into her chair and when she saw me, relief came over her face. I could tell gram was being ornery and I would rescue them both from each other. The aide left us and then it was just gram and I. All was calm. I helped her into her chair, as she can no longer walk by herself.
Gram was overcome with emotion throughout my time with her. When it came time to leave, it was really difficult to do so, actually…but I’ll talk about that part later. I could tell that her mind was having a lot of trouble dealing with what she was feeling. Happy I was there. Confused as to why she was there. Trying to remember simple things while processing complicated emotions. Her mind has become so childlike and it made me feel such profound love for her, it is hard to even put into words. It was powerful. I could feel the whirling going on in her mind.
I could see in her eyes that she knew who I was, but could comprehend little else except for the strong emotion of love towards me too.
I just sat there and talked to her and told her how strong she was. She told me that she was scared. She just would look at me and start to cry. I would tell her stories of how she has gotten through so many things in her 93 years on this earth and that this is her next hurdle. She has to accept “what is” even though she doesn’t understand it.
For Mother’s Day, I had gotten her some lotion and I offered to rub it on her dry legs, feet and arms. She said, “You would do that for me?”
I put her leg gently upon my knee, took off her shoe and sock and began to give her a massage. Her smile beamed and she kept on telling me how heavenly it felt. Her skin had become so dry and uncomfortable and the lotion, along with my loving touch, was welcomed by her.
I remember when I was in the hospital for a while, I hadn’t been touched for quite some time. My mom put lotion on my legs and feet and I remember how freakin amazing it felt. I wanted to return the favor. That little act of kindness was so greatly appreciated and it was something that I never forgot. I think that most people take for granted those small luxuries in life because we can do them when we are well…but when someone can no longer touch their own feet or rub lotion on themselves, we owe it to others to help do that for them. Out of love and kindness. Remember I said that. It will come in handy one day. The power of touch is remarkable.
Back to my story…
When I was done with her legs and feet, I moved onto her arms and hands. Now all skin and bones – literally – it was just so…I don’t even know the words to describe how I felt here. Maybe it was more like the realization hit me of what it will be like when I am old and frail. The other part was that I realized that her time left on earth was closer to the end than I wanted it to be. As an adult,  I have become very close to my gram and it broke my heart to see her like this.
It was an act of love from me to her and my the end of it, she was crying once again. She looked at me and said, “Jennifer, you bring people to life. That is what you do.”
Dang it, even as I write this now, I am crying…but when she said it, I stopped, smiled and cried with her. I got up and gave her a huge hug. That was the greatest compliment that I have ever gotten.
She then insisted that I help her stand. So I did. She wanted to hug me. So we did. I held her so that she wouldn’t fall and she hugged me as hard as she could. She kept on kissing me and squeezing me as hard as she could. I could tell that she didn’t want to let go. But she had to.
It soon became too hard for her old bones to keep standing so I gently lowered her back into her wheelchair so she could rest.
She followed me to the door so she could watch me walk down the hallway as I left. She wanted to get up and give me a hug and so we did one last time. Tears and smiles in both of our eyes, we hugged once again.
I turned around about halfway through my departure and saw he cute little head peaking from the doorway… I love you, gram.

Thank you so much for reading today. I hope that I made you smile and think a little bit. To reach me, visit SALending.com

Check out my Podcast on Amazon, Apple, and Soundcloud – Jen’s 10 G’s
0Shares